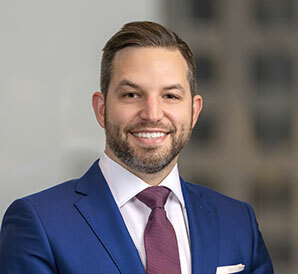 Nick is a first-chair trial lawyer who has tried 30+ jury trials, bench trials, and arbitrations. He splits his time between the Firm's offices in Minneapolis and Chicago, and regularly appears in courts across the country.

Nick's clients range from publicly-traded companies and large investment funds to individuals, and he represents them in cases ranging from bet-the-company matters to smaller disputes. Many of those he advises are in the financial industry, including banks, private equity funds and their portfolio companies, hedge funds, mortgage companies, and investment advisers.

For jury trials first-chaired by Nick, many times jurors have ranked Nick the highest rating of "excellent" in all categories on anonymous juror questionnaire forms supplied by the court, and wrote comments like the following:

Nick has served on the faculty of the National Institute for Trial Advocacy (NITA), which is the country’s leading organization for trial skills training. Through NITA and other legal education organizations, he has presented to many associates and partners at the country’s largest corporate law firms about trial techniques, picking juries, and examining expert witnesses.

Nick has been recognized by Super Lawyers as a “Rising Star” for each of the last five years and also selected for Benchmark’s "40 & Under Hot List." In its 2020 rankings, Benchmark recognized him as a “Future Star” and wrote the following:

“One peer praises litigator and future star Nicholas Callahan as ‘one of the best trial lawyers I’ve come across.’ A client echoes this sentiment, asserting, ‘Nick is creative, responsive, professional, and efficient. He provides high quality work and works to understand the client's business, which helps him serve as a true outside partner.’"

Nick is married with four kids and an energetic labrador. The chaos of his home makes a trial courtroom feel relaxed by comparison. When not working, Nick is outdoors with his kids and loves travel, wakeboarding off his boat in the summer, skiing and snowboarding in the winter, attending music shows, scuba diving, and all adventures. He has provided more than 1,000 hours of pro bono legal services in the last 10 years.

University of Wisconsin-Madison, B.S., with distinction, 2005