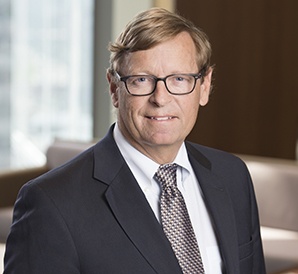 Jim is the former co-chair of the firm’s Motor Vehicle Group. He also is a senior partner in the firm’s Litigation and Intellectual Property Groups.

Among his successful engagements have been a number of precedent-setting cases, including:

In addition to practicing before dozens of administrative agencies around the country, Jim is admitted to practice in the State of Illinois, the U.S. Supreme Court, the Fifth and Seventh U.S. Courts of Appeal, and numerous U.S. District Courts.

Throughout his career, Jim has served on several business boards, including U.S. Laboratories Inc., Pharos Innovations LLC; and on the boards of several not-for-profit organizations, including: Rise International, which has now built over 160 schools in rural Africa; Children’s Heart Foundation; Williams Heart Foundation; and The Chicago Foundation.